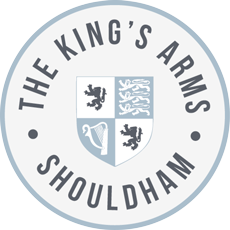 The King’s Arms would no longer be a pub if it wasn’t for the heroic efforts of the people of Shouldham and our many supporters, both individuals and organisations, too numerous to mention. Thank you all!

The closing of our pub causes much wailing and gnashing of teeth among its regulars. We soon learn that the owners, Punch Taverns, have put it up for sale.

We conduct our first survey. The response is positive: Shouldham wants its pub to reopen.

The pub remains closed, with no buyer on the horizon, so we contact the Plunkett Foundation – a charity helping rural communities take charge of the issues affecting them, by means of community ownership – for advice. We apply for, and get, a grant giving support from that organisation. SOKA (Save Our King’s Arms!) is born.

A public meeting is organised. Rousing speeches are given and many of the audience are won over, believing it possible that we can buy our village pub.

Progress is fast: we set up a committee of 11 villagers and we become Shouldham Community Enterprises Ltd, an Industrial & Provident (cooperative) Society for the benefit of the community.

Through the spring and summer we are busy fundraising, applying for grants and making plans for a share issue. A cake sale, regular open mic nights, a monthly raffle, a youngster doing a sponsored bike ride round the village – Shouldham shows its tremendous community spirit to raise money for our cause. We also receive a grant to help our organisation and prepare for a share issue.

We focus our efforts on the weekend of August 16th-18th, starting with the official launch of our share issue and continuing with a music and beer festival. The event is a great success. We also organise a fundraising fun run celebrating the centenary of Shouldham’s most famous son: 1930s Arsenal and England football star, Alf Kirchen.

The share issue is fast approaching its target of £150,000, greatly helped by the Eastern Daily Press getting behind our campaign. A fundraising quiz chaired by EDP editor, Nigel Pickover raises £800 and the publicity for our cause is immense.

Helped by a Tweet from Norfolk boy Stephen Fry to his 6 million followers, we reach our target of £150,000 of shares sold. The vast majority have been bought by people living in Norfolk, particularly in the Shouldham area. A total of 189 people have invested in our pub.

Our committee gets news that our application for a major grant from the Department of Communities & Local Government (DCLG) is likely to be successful. This grant will enable us to buy and refurbish the pub.

We receive the grant and finalise a purchase price with Punch Taverns. On January 10th, Shouldham Community Enterprises becomes official owner of the King’s Arms. We have saved our pub!

Voluntary work to get the pub ready for reopening continues, and we start the process of finding a manager. SOKA, now renamed Support Our King’s Arms, continues its fundraising efforts, focusing on buying garden furniture and children’s play equipment.

We advertise widely for a manager, and after a two-day interview process choose Ian Skinner who, with his partner Abbie Panks, will live in the King’s Arms. Ian and Abbie had helped greatly in our campaign: Ian ran the bar at our beer festival, and Abbie masterminded our publicity campaign. The pub gets a further boost with two grants: from Pub is the Hub, and the Geoffrey Watling Charity. This money will help us ensure that the King’s Arms caters for the entire local community.

Local builders Steven Seals Ltd carry out the refurbishment of the pub.

Our supporters, all volunteers, redecorate, renovate and re-stock the pub, and transform the garden.

We appoint our chef!

Our opening! We aim to celebrate with a Beer & Music Festival on The Green, from September 12th-14th. But our project hasn’t ended. We plan to start a community café at the eastern end of the building and to self-build disabled toilets and baby-changing facilities. And in January 2015, we aim to provide school meals for St Martin at Shouldham School. No challenge seems too great for Shouldham!

Wow, it’s been a year and a half already. Time certainly flies when you are having fun. We are thrilled to have welcomed so many people already to our pub and are looking ahead to the future with more plans.

We are delighted (and a little shocked) to have been voted West Norfolk CAMRA Pub of the Year 2016 AND been given an award for our Contribution to the Community by the Borough Council.

An update in 2018..it’s been another busy 18 months  at the King’s Arms, much to our surprise we not only retained our 2016 CAMRA West Norfolk Pub of the Year award in 2017, we also held it for an unprecedented THIRD year. We have also been active helping other groups in the are with their pub campaigns and we were thrilled to receive an award in 2017 from The Plunkett Foundations for the best example of a community venture in the East of England.

We have so much going on, if you’ve not joined our Facebook page yet, please do!